Children are exposed to violence every day in their homes, schools, and communities. Such exposure can cause them significant physical, mental, and emotional harm with long-term effects that can last well into adulthood.  Exposure to violence can limit children's potential and increase their likelihood of becoming involved in the juvenile or criminal justice system. These children are often more likely to develop a substance use disorder; suffer from depression, anxiety and posttraumatic stress disorder; and fail to thrive in school, according to the Office of Juvenile Justice and Delinquency Prevention (OJJDP)-sponsored National Survey of Children's Exposure to Violence (NatSCEV II) conducted in 2011.

OJJDP provides funding for communities to develop and provide support services for children exposed to violence. Through the FY 19 Comprehensive School-based Approach to Youth Violence and Victimization Prevention, Intervention and Accountability initiative, OJJDP made 9 awards totaling $7,107,594 to address youth violence and victimization in school-based settings. With training and technical assistance from the Local Initiatives Support Corporation (LISC), sites are implementing evidence-based prevention, intervention, and accountability efforts.

In FY 20 OJJDP will award more than $7 million for communities to develop and provide support services for children exposed to violence in their homes, schools, and communities; and to develop, enhance, and implement violent crime reduction strategies that focus on violent juvenile offenders.

In October 2016, the Justice Department launched Changing Minds, a national campaign that seeks to raise awareness, teach skills, and inspire public action to address children's exposure to violence and the resulting trauma. OJJDP developed Changing Minds in collaboration with Futures Without Violence, a national health and social justice nonprofit organization; the Ad Council; and Wunderman, the advertising agency.

The OJJDP-funded Enhancing Law Enforcement Response to Children Exposed to Violence and Childhood Trauma launched in May 2017. The toolkit provides law enforcement professionals with resources to effectively respond to children who have been exposed to violence.

The toolkit was created as part of a cooperative agreement among the International Association of Chiefs of Police, the Yale Child Study Center and OJJDP.

Commercial Sexual Exploitation of Children
This section of the OJJDP website features programs, OJJDP-sponsored reports, and OJJDP-funded efforts to combat the sexual abuse and exploitation of children.

The Vicarious Trauma Toolkit (April 2017)
In 2013, the U.S. Department of Justice, Office of Justice Programs, Office for Victims of Crime, awarded a grant to Northeastern University's Institute on Urban Health Research and Practice to work with stakeholders in the field to develop the Vicarious Trauma Toolkit (VTT). The VTT is a state-of-the-art repository of nearly 500 tools and resources compiled to assist victim services and first responder agencies and organizations in raising awareness about and addressing the traumatic experiences of other people, known as vicarious trauma. Although  exposure to vicarious trauma is an inevitable occupational challenge for the fields of victim services, emergency medical services, fire services, law enforcement, and other allied professionals, organizations can mitigate the potentially negative effects by becoming vicarious trauma-informed.

Task Force on American Indian and Alaska Native Children Exposed to Violence (November 2014)
This task force of U.S. Attorneys and officials from the Departments of the Interior and Justice and an advisory committee of experts was appointed to examine the scope and impact of violence facing American Indian and Alaska Native children and make policy recommendations on ways to address it. This is their final report and recommendations.

Through Our Eyes: Children, Violence, and Trauma (last updated April 2014)
This Office for Victims of Crime (OVC) web resource presents a video series and related materials that discuss how crime, abuse, violence, and trauma affect children.

The National Child Traumatic Stress Network (NCTSN)
The NCTSN is funded by the Center for Mental Health Services, Substance Abuse and Mental Health Services Administration, U.S. Department of Health and Human Services and jointly coordinated by UCLA and Duke University. NCTSN aims to raise the standard of care and improve access to services for traumatized children, their families and communities throughout the United States.

Compendium of Research on Children's Exposure to Violence 2010-2015 (June 2016)
This resource from the National Institute of Justice (NIJ) provides abstracts for NIJ-funded research related to youth exposure to violence.

The Facts on Children's Exposure to Violence (December 2015)
Developed as part of the Defending Childhood Initiative, this OJJDP-sponsored fact sheet provides statistics that detail the prevalence of children's exposure to violence in their homes, schools and communities.

Prevalence of Childhood Exposure to Violence, Crime, and Abuse: Results From the National Survey of Children's Exposure to Violence (August 2015)
The goal of this OJJDP-sponsored study is to provide health care professionals, policy makers, and parents with current estimates of exposure to violence, crime, and abuse across childhood and at different developmental stages.

Children’s Exposure to Violence and the Intersection Between Delinquency and Victimization (October 2013)
This OJJDP-developed bulletin looks at how victimization and delinquency converge or diverge among youth of different ages. 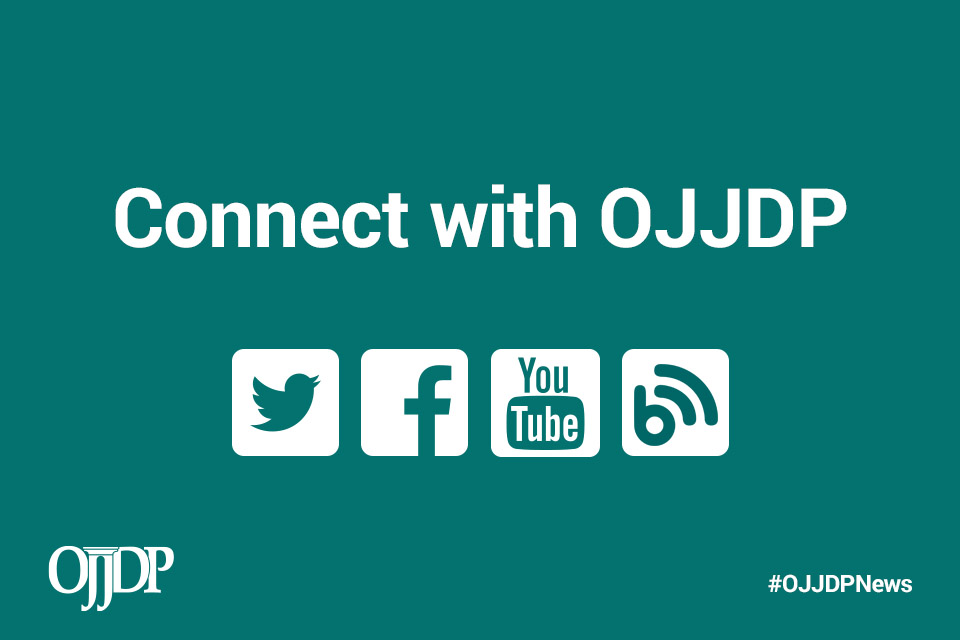 Stay Connected with OJJDP to keep informed about issues, research, reports and programs on children exposed to violence and trauma, subscribe to OJJDP's bimonthly electronic newsletter OJJDP News @ a Glance and the JUVJUST listserv; or follow OJJDP on Twitter or Facebook.