President Biden Champions Community-Based Responses to Substance Use by Youth

On Sept. 30, 2022, President Joseph R. Biden declared October National Youth Substance Use Prevention Month and underscored the impact early prevention efforts play in the lives of young people. “For every dollar we spend today on effective school-based prevention programs, we save $18 in the future by avoiding potential medical costs and boosting productivity on the job,” the President said.

"This month, I call on everyone—parents, siblings, friends, neighbors, teachers, community members, and more—to reach out to the young people in their lives to share information, promote healthy lifestyles, and help transform lives through evidence-based substance use prevention," he said. 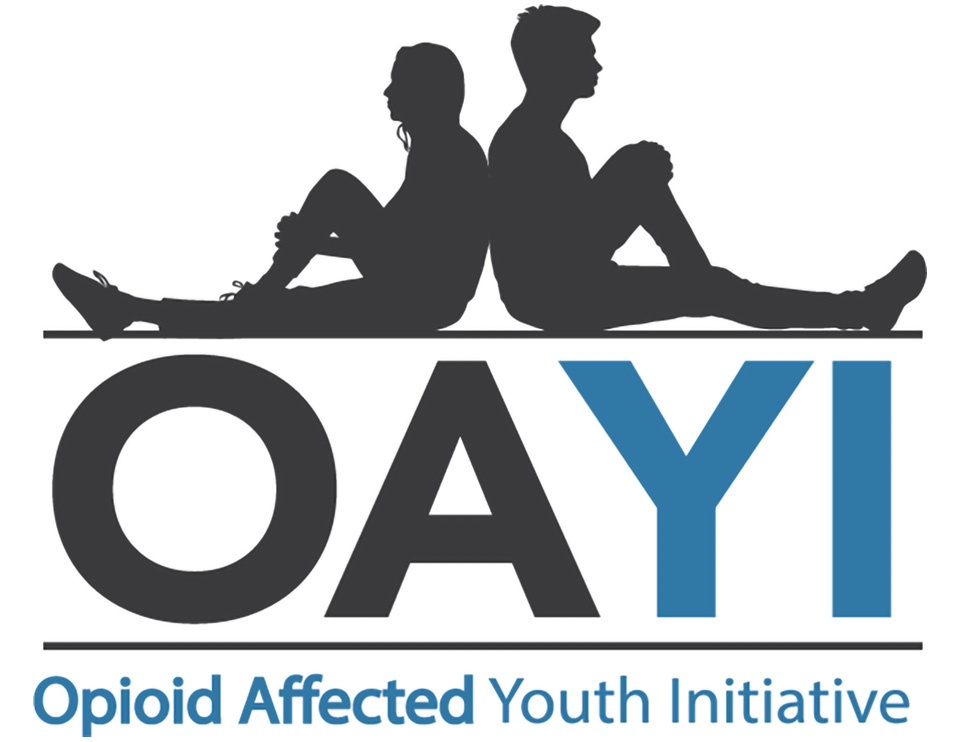 Opioid-involved overdose deaths reached 68,630 in 2020, accounting for almost three-quarters of all drug overdose deaths; among people ages 15 to 24, overdoses from opioids resulted in 5,986 deaths that year.

OJJDP dedicates funding for programs to assist youth impacted by substance use disorders, including treatment and recovery programs, and mentoring programs that give youth role models who support and encourage them. From fiscal years 2019 to 2021, the Office awarded almost $65 million to communities, state agencies, and providers funded under the Opioid Affected Youth Initiative and for mentoring programs serving youth affected by substance use disorders. The Office estimates it will award more than $25 million to those programs in fiscal year 2022. 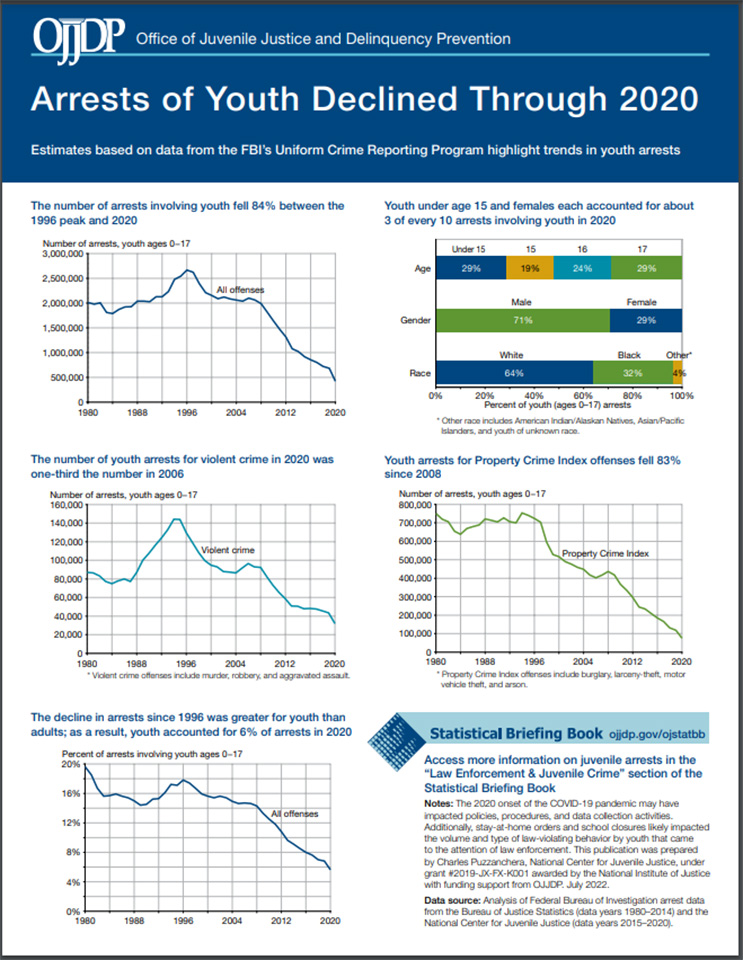 OJJDP has updated its Statistical Briefing Book, adding a new data snapshot that details trends in overall arrests involving youth ages 17 and younger. The snapshot is based on data from the FBI’s Uniform Crime Reporting Program. According to those data:

The snapshot notes that the onset of the COVID-19 pandemic in early 2020 may have impacted policies, procedures, and data collection activities, while stay-at-home orders and school closures likely impacted the volume and type of behaviors receiving law enforcement attention. 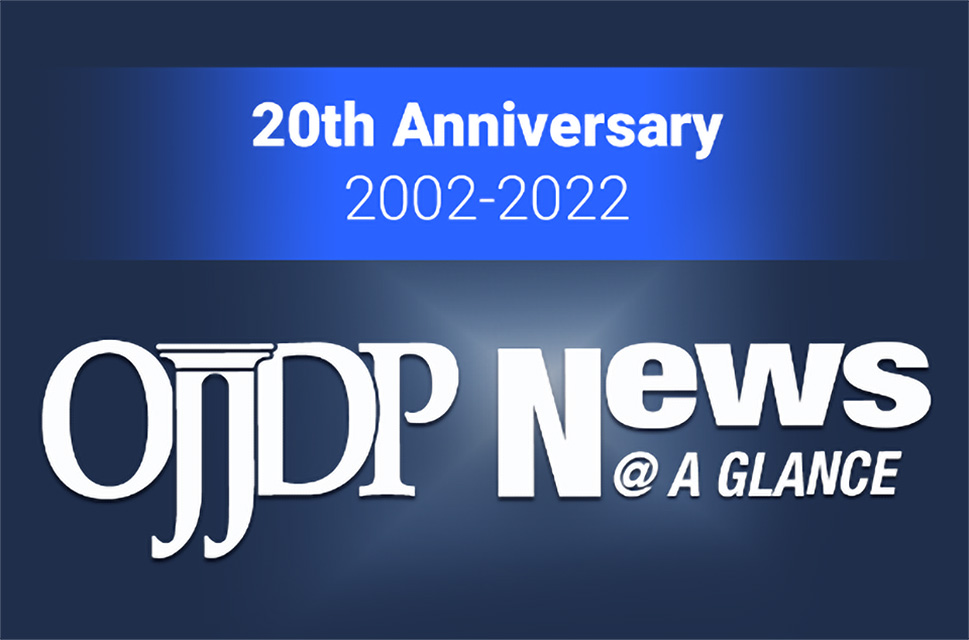 The inaugural issue of OJJDP News @ a Glance launched in February 2002 and, 20 years later, OJJDP’s main vehicle for disseminating Office news has expanded and is going strong. OJJDP introduced the newsletter as part of a “new approach to information dissemination” that would come to focus on the Office's website and listservs rather than print publications. “Information sharing remains a top priority as OJJDP streamlines its publishing processes and looks for innovative ways to provide the best possible access to information,” the first OJJDP News @ a Glance stated.

OJJDP has continued to innovate and finetune its communications, a process that has included growing the newsletter and introducing columns that became mainstays:

The National Gang Center developed the curriculum in consultation with practitioners from across the nation to ensure the training was authentic, credible, and based both on research and lived experience. It included sessions on outreach, evidence-based practices, trust building, school-based partnerships, and tips for working with law enforcement, the government, the community, and families. Attendees discussed a wide range of issues, including why youth join and leave gangs, how to engage and build relationships with youth involved in gangs, and plans for gang desistance. Eighteen professionals attended the no-cost training, including an OJJDP staff member and a senior advisor for the Office of Justice Programs.

The latest issue of The AMBER Advocate—the second issue in 2022 and 50th since the newsletter launched in 2006—features a cover story on AMBER Alert Training and Technical Assistance Program Administrator Janell Rasmussen. She assumed her role in March 2021, bringing more than 20 years of experience in public safety, including several law enforcement programs in Minnesota. In the article, Ms. Rasmussen reflects on her first full year as administrator and describes program goals for the future. 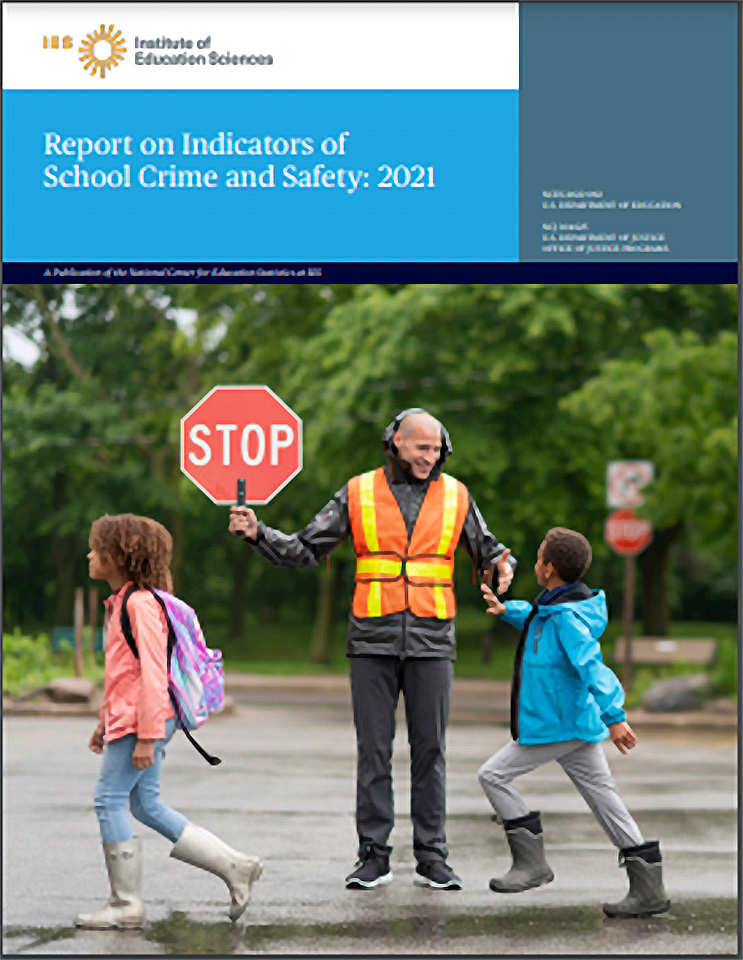 Several crime and safety issues became less prevalent at elementary and secondary schools in the years between 2009 and 2020, according to Report on Indicators of School Crime and Safety: 2021. Released in June 2022, the report is the 24th in a series of annual publications produced jointly by the National Center for Education Statistics and the Bureau of Justice Statistics.

Among students ages 12 to 18, the rate of nonfatal criminal victimization (including theft and violent victimization) at school decreased from 51 to 11 victimizations per 1,000 students, and student behaviors targeting other students were generally less prevalent. However, when comparing reports by public schools in 2019–20 versus 2009–10, higher percentages of schools reported: 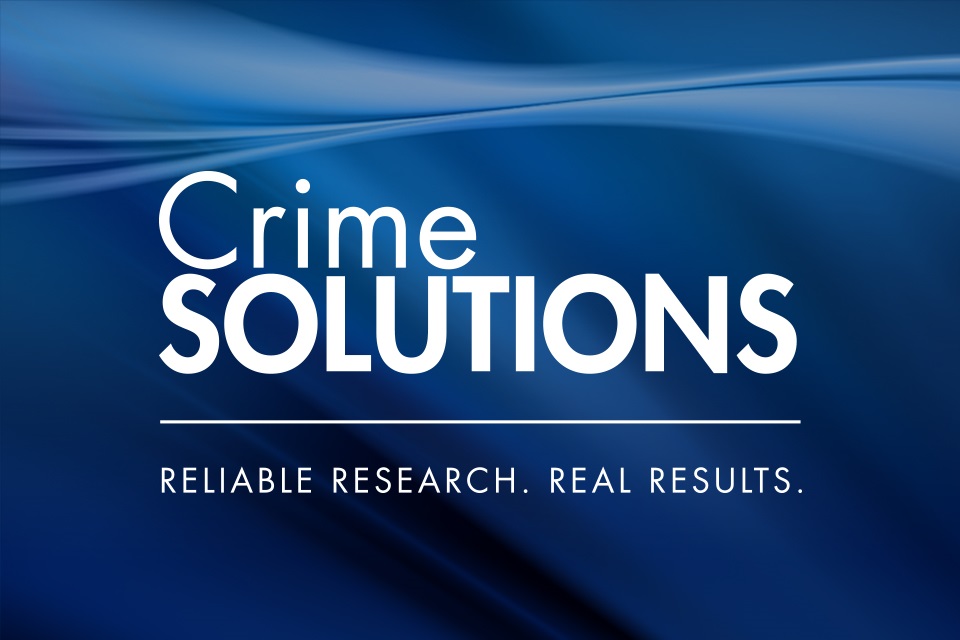 The National Institute of Justice’s CrimeSolutions resource has added a practice rated “effective” for reducing alcohol use by youth. It involves time-limited, low-dose, school-based therapeutic programs that teach skills and motivate youth in middle school, high school, or vocational education and training settings. The program is based on the transtheoretical model of behavior change, which argues that readiness for change develops along a series of stages—precontemplation, contemplation, preparation, action, and maintenance—rather than as a fixed event. While effective for reducing alcohol use, the practice received a “no effects” rating for reducing marijuana use.

CrimeSolutions has also added a gender-responsive drug treatment court program deemed “promising.” The four-phase program for women on probation prioritizes those who are mothers, have substance use problems, and whose profiles suggest an increased risk for reoffending. At the 2-year followup, women in the treatment group (ages 17 to 52) were 17.5 percent less likely to have a new conviction when compared with women on probation who did not participate in the program; that difference was statistically significant. This gender-responsive drug treatment court—in an urban county in a midwestern state—began in 2007 to address the rising number of women involved in the criminal justice system.

A community-based, trauma-informed, gender-responsive advocacy intervention was deemed “promising” for girls ages 11 to 17 who are at risk for or are already involved in the juvenile justice system. Girls who participated in the Resilience, Opportunity, Safety, Education, Strength (ROSES) program were statistically significantly less likely to engage in physical fights and minor status-offending behavior when compared with girls in the control group. The 10- to 12-week ROSES program follows an individualized, strengths-based, and multilevel approach. Program advocates and their assigned clients meet in the community twice weekly and engage in advocacy work for approximately 10 hours each week.