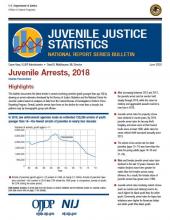 OJJDP and the National Institute of Justice have released "Juvenile Arrests, 2018." This bulletin documents recent trends in juvenile arrests using data from the FBI's Uniform Crime Report. Overall, juvenile arrests have declined for more than a decade, but patterns vary by demographic group and offense.

Findings show that in 2018, law enforcement agencies made an estimated 728,280 arrests of people younger than 18 years old. This was the lowest number since at least 1980. Between 2009 and 2018, the number of juvenile arrests fell 60 percent. In addition, relative declines in arrests have been greater for boys than for girls across many offenses. The female share of juvenile arrests has grown from 18 percent in 1980 to 30 percent in 2018.